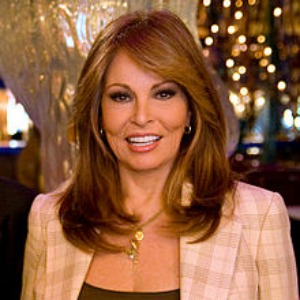 Raquel Welch became an instant icon when she burst onto movie screens in the science fiction classics Fantastic Voyage and One Million Years, B.C. The famous cave girl poster of Welch, from the prehistoric epic, became the most popular pin up of the 60′s decade and helped launch Welch’s career as a movie star. It also established her as the first authentic sex symbol since Marilyn Monroe.

More than 40 years later, Welch remains an entertainment icon. In her 2010 book, Raquel: Beyond the Cleavage, Welch talks, woman to woman, about her views on all that comes with being a member of the female sex—love, sex, style, health, body image, career, family, forgiveness, aging, and coming of age.

With warmth, humor, conviction, and honesty, Welch reveals her approach to preventative aging, her life-changing commitment to yoga, her recipe for eating right, her flair for fashion, and much more. Deeply personal, Welch wrote every word herself—no ghostwriter, Beyond the Cleavage is Raquel Welch’s gift to every woman who longs to look and feel her best, and be at peace with herself. Through every inspiring word, Raquel Welch proves she remains one of the most vital and enduring female icons of her day.

From her unforgettable beginning, Welch went on to create motion picture heroines in such films as The Three Musketeers — for which she won a Golden Globe Award — and she became an early female action figure in westerns like 100 Rifles and Hannie Caulder while also starring in delightful comedies including The Last of Sheila, Fathom, and Mother, Juggs & Speed. Who will ever forget her portrayal as the roller derby queen in Kansas City Bomber, (Life Magazine cover 1972), or as Lillian Lust in Bedazzled. She also demonstrated a swashbuckling flair in the outrageous role of Myra in the underground classic Myra Breckinridge (Time cover story 1969). Welch most recently appeared in the comedy blockbuster Legally Blonde with Reese Witherspoon and starred in the critically acclaimed comedy Tortilla Soup. In addition, she has just completed work on a new film co-starring Burt Reynolds entitled Forget About It. A five-disc DVD set of Raquel Welch films Sex Symbol – The Raquel Welch Collection is now available from Fox Home Video.

No stranger to live audiences, in the early 80′s Broadway beckoned and Welch made the quantum leap from movies to the Great White Way, making her triumphant debut on Broadway in Kander and Ebb’s hit musical Woman of the Year. “We’ve never heard wolf whistles like that before on the Great White Way!” wrote Frank Rich, the New York Times critic. Her theatrical success triggered another Life magazine cover story (1982), its headline proclaiming, “Raquel Takes Manhattan!” And she did, breaking all previous box office records at the famed Palace Theatre. In the 90s, Broadway warmly welcomed Welch’s return when she was gutsy enough to replace Julie Andrews in Victor/Victoria, making the role her own and receiving praise and nightly standing ovations.

In response to the legions of women who remain endlessly fascinated with her health and beauty regimen, Welch published a book on yoga in 1984. Almost 20 years before the current yoga trend, her bestselling book on Hatha Yoga, Raquel: Total Beauty and Fitness, and its companion video changed the lives of millions of American women. She still practices yoga every morning at 6 AM.

At the podium, Welch reveals a self-deprecating sense of humor, a shrewd grasp of the pitfalls of stardom and a surprising candor when describing her own life. She takes her audience behind the scenes of the so- called glamorous life and strips the veiled myth from her Hollywood image. In doing so, she tells fascinating stories about what happened inside the sound stages and on the foreign locations of her various films in the company of stars like Dean Martin, Frank Sinatra, Richard Burton, James Stewart, Jodie Foster, James Garner, Burt Reynolds, Faye Dunaway, Mae West, Robin Williams and Alicia Silverstone.

She also shares some unexpected aspects of her personal journey. As a woman who has lived an extraordinary life, Welch’s high-spirited personality adds dimension to her take on being an American Woman. Her insights on the never-ending battle of the sexes come from her own admitted mistakes, four failed marriages – and her philosophy of life comes from her ever-resilient nature and sense of fun which has spanned a four-decade career.

Still vivacious and beautiful in her 60s, Welch is living testimony to how to age gracefully through maintaining a healthy lifestyle and also an active sense of humor. “Aging is a beeyotch!” She adds, “60% of Americans are Boomers, and yet they are all but invisible in the popular media and American culture. That has got to change.”

Raquel: Beyond the Cleavage,

"Rachel is simply a perfect speaker. She was powerful. Her story motivational and the nuggets she gave us will remain forever."