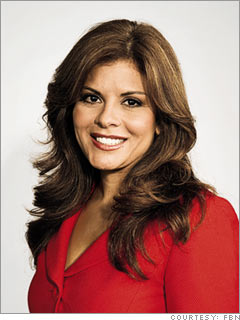 Gomez serves as Anchor, FOX Business Network and is co-host of "Happy Hour," the break-out hit of the new Fox Business Network, which combines a fast pace with conversations and information; Called “a new breed of news show, where a younger version of "Regis and Kelly" meets "Cheers" with the breeziness of "Entourage."

She is also currently serves as Business Correspondent for FOX News Channel (FNC), providing daily market updates and regularly appearing on Your World with Neil Cavuto and the Cost of Freedom business block on Saturdays.

Gomez joined FNC as a news update anchor when the network launched in 1996. She later served a Los Angeles-based correspondent and was then named a New York-based correspondent in February 2003. In this position she provided regular updates on the war in Iraq.

Prior to her tenure at FNC, Gomez worked as an anchor/reporter for Lifetime Television and as a business writer for The Associated Press. She also worked as a reporter/anchor for local affiliate television stations in McAllen, Texas; Phoenix, Arizona; and San Diego, California.

She is a graduate of the University of Maryland's College of Journalism.