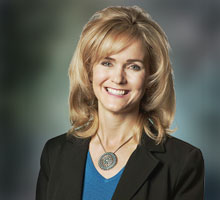 Rebecca Hagelin has championed the pro-family message in both Washington and around the nation for some 25 years, educating parents and civic organizations on how to understand the media culture and its affect on families. She is the President and CEO of Rebecca Hagelin Communications and Marketing, LLC. Her company specializes in talk radio ad buys, comprehensive communications, public relations and marketing services, as well as education on the media industry. Hagelin is also the Senior Communications Fellow at The Heritage Foundation. Her weekly column for The Washington Times, "How To Save Your Family" appears on Mondays in both the online and print editions of the paper. She also writes a weekly column that explores social and cultural issues for Townhall.com, PatriotPost.US, Crosswalk and other Web sites and newspapers around the country.

She is the author of the acclaimed book, Home Invasion: Protecting Your Family in a Culture That's Gone Stark Raving Mad, published in 2005 by Thomas Nelson, and 30 Ways in 30 Days to Save Your Family which quickly became both an Amazon and Washington Post best seller when it was released by Regnery Publishing in April of 2009.

She speaks around the nation to civic, educational, business and religious organizations about the critical role active parenting plays in helping children dissect and challenge the damaging messages of the pop culture.

Hagelin served as Heritage's Vice President of Communications and Marketing from 2002-2008 where she expanded the organization's communications, public relations and marketing practices into a 21st century media world where blogs and Web sites compete internationally with traditional newspapers, magazines, radio and television in a constant 24-hour news cycle. Hagelin also employed modern marketing techniques in her information strategies, making the Heritage "brand" recognizable and successful in specific target audiences that include the media; civic, government and educational leaders; and conservatives around the world.

Hagelin has more than 20 years of experience in developing and executing comprehensive public affairs and marketing strategies. In the 1990s, she began a consulting business where her clients included numerous non-profits, elected officials and businesses. She has also served as vice president of communications for WorldNetDaily.com, a "fiercely independent" news site that specializes in the investigative reporting of government waste, fraud and abuse. She joined the company in 1998 as communications director and was promoted to vice president after only six months because of her outstanding work product and strategies.

Hagelin began her career in 1983 as public relations director for the Center for Judicial Studies and Benchmark Magazine.

In 1986, she joined the national management team of Concerned Women for America as director of communications and oversaw the development of the organization's first national PR efforts, trained volunteers and spokespeople in public relations techniques, and served as one of the organization's primary spokespersons.

In 2006, Concerned Women for America named her one of the nation's "Top Ten Evangelical Women," and in 2007 the Clare Boothe Luce Policy Institute named Hagelin one of the 12 "Great American Conservative Women." She serves on the board of directors/advisors for many family related organizations and is active in her church. She is also a senior editor of Salvo magazine, a new publication that challenges young adults to think critically about the destructive/false messages of today's culture.

She has been a commentator for Salem Radio Network and a guest co-host of "Point of View" as well as a guest host for Washington, DC's 630 WMAL radio, an ABC affiliate. She is the author of numerous articles published nationally and is a veteran of hundreds of radio, television, newspaper, and magazine interviews, including numerous appearances on every major television network.

Hagelin is a 1983 cum laude graduate of Troy University, where she received a Bachelor of Science degree in Broadcast/Journalism and a Bachelor of Science degree in Social Sciences. In high school, she hosted her own daily radio show on a 100,000 watt radio station in Florida. She attended college on a full scholarship, hosted a weekly college television show, and was a member of seven honor and leadership societies. In 1995, she was named Troy University's "Outstanding Alumnus in Public Relations" by the School of Journalism. Rebecca and her husband, Andy, have two sons (who are both Eagle Scouts) and a daughter. They live in Arlington, Va.

In Search of Heroes: How to be a Culture Warrior

Family First: Steps to Take Today to Secure Your Own Future Happy Family

Faith, Family and Femininity: How Radical Feminists are Wrecking Your Future

Media culture and its affect on families.

"Rebecca was a great addition to our line-up of speakers. We appreciate her efforts in customizing the presentation to our needs and her enthusiasm for the cause."