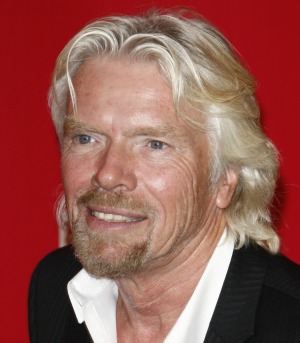 Richard Branson is the eccentric and outspoken chairman of Virgin Atlantic Airways and the founder of Virgin Records, which he recently sold for an unprecedented $1 billion. Famous for his daring entrepreneurial style, he oversees the Virgin Group, Ltd. an extensive conglomerate encompassing over 360 companies, including recording studios, a travel business, publishing entities, and retail industries worldwide. An experienced daredevil, Branson has raced powerboats across the ocean and has set distance records in hot air balloons. His unconventional style of living is only a part of his undeniable knack for beating impossible odds in business and in life.

Virgin started when Branson was the tender age of 20. In 1972, soon after he opened a Virgin record store on Oxford Street in London, the young entrepreneur opened a recording studio in Oxfordshire and Virgin Records was born. Mike Oldfield was the first artist to sign and his album, Tubular Bells, sold more than five million copies. During his ownership of Virgin Records, Branson turned it into a major success, signing such big names as Steve Winwood, Paula Abdul, Belinda Carlisle, Genesis, Phil Collins, Peter Gabriel, Simple Minds, The Human League, Bryan Ferry, Culture Club, Janet Jackson, and The Rolling Stones. In 1992, he sold the Virgin Music Group record labels, music publishing, and recording studios to Thorn EMI in a $1 billion deal.

Since 1985, he has been involved in a number of record-breaking land and air speed and distance attempts. In 1986, with his boat Virgin Atlantic Challenger II, he crossed the Atlantic Ocean in the fastest recorded time ever. One year later, Virgin Atlantic Flyer – a hot air balloon – was the first to cross the Atlantic Ocean and was the largest ever flown at 2.3 million cubic feet capacity, reaching speeds in excess of 130 mph. Again In 1991, Branson crossed the Pacific Ocean from Japan to Arctic Canada, breaking all existing records with speeds of up to 245 mph in a balloon measuring 2.6 million cubic feet.

Branson has guest starred on several television shows, including Friends, Baywatch and Only Fools and Horses. He also starred in The Rebel Billionaire.

In addition to his business activities, Branson backs a number of charities, including The Healthcare Foundation. He became Sir Richard Branson after Queen Elizabeth knighted him in 1999 for his business ability and enthusiasm for the spirit of Britain.

The Future of Business

The Secrets of Marketing

"Mr. Branson style is so unique and inspiring. An evening to remember."