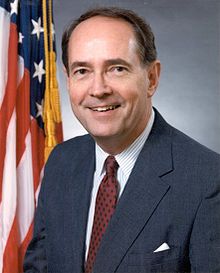 Richard Lewis "Dick" Thornburgh has led a highly distinguished and successful career of service to his nation for over 25 years. He has served as Pennsylvania's first Republican two-term governor, U.S. Attorney General under Presidents Ronald Reagan and George H. W. Bush, as well as Under-Secretary General of the United Nations, the highest American appointment to the U.N.

Dick Thornburgh is well known to TV audiences for his frequent television appearances on CNN's Larry King Live, where he has addressed growing public concern over our legal system. Recognized as one of the nation's most distinguished conservative statesmen, Dick Thornburgh speaks with authority on a broad spectrum of pressing national issues; some of those issues include crime and legal reform, politics and a national agenda, and America's changing world role.

During his service as Governor, Thornburgh balanced state budgets for eight consecutive years, reduced both personal and business tax rates, cut the state's record-high debt and left a surplus of $350 million.

After his unanimous confirmation by the United States Senate, Thornburgh served three years as Attorney General of the United States in the cabinets of Presidents Reagan and Bush. He mounted an unprecedented attack on white-collar crime and established strong ties with law enforcement agencies around the world to help combat drug trafficking, money laundering, terrorism, and international white-collar crime. An honorary Special Agent of the Federal Bureau of Investigation, Thornburgh currently chairs a panel of the National Academy of Public Administration examining the FBI's post-9/11 transformation process and is a member of the FBI Director's Advisory Board.

As Attorney General, Thornburgh played a leading role in the enactment of the Americans with Disabilities Act, and his office mounted a renewed effort to enforce the nation's antitrust and environmental laws as well. In 2002, he received the Wiley E. Branton Award of The Washington Lawyers' Committee for Civil Rights and Urban Affairs in recognition of his "commitment to the civil rights of people with disabilities." Thornburgh also took vigorous action against racial, religious, and ethnic hate crimes. In August 2002, he was appointed Examiner in the WorldCom bankruptcy proceedings (the largest ever filed at the time), and as a consultant to the World Bank on preventing fraud and abuse in its programs. In 2004 he was also chosen by CBS to co-chair an independent investigation into the 60 Minutes “Wednesday” segment on President Bush's service in the Texas Air National Guard.

In 2006, Thornburgh received a "Lifetime Achievement Award" from The American Lawyer Magazine for "important contributions to public life while building an outstanding private practice." In 2007, he was selected by his peers to be included in "Best Lawyers in America" and was also named as one of Washington's top lawyers by Washingtonian Magazine. He currently chairs the Legal Advisory Board of the Washington Legal Foundation and is a member of the American Bar Association's Task Force on the Attorney-Client Privilege.

During his service at the United Nations, Thornburgh was in charge of personnel, budget, and finance matters. His report to the Secretary-General on reform, restructuring, and streamlining efforts designed to make the United Nations peacekeeping, humanitarian, and development programs more efficient and cost-effective was widely praised. Throughout his career he has traveled widely, visiting more than 40 countries and meeting with leaders from Canada, Mexico, Europe, Africa, the Middle East, Russia, Ukraine, Japan, China, Taiwan, Korea, India, Cambodia, Australia, New Zealand, and Central and South America. He served as an observer to Russia's legislative (1993) and presidential (1996) elections.

A native of Pittsburgh, Thornburgh was educated at Yale University and at the University of Pittsburgh School of Law, where he served as an editor of the Law Review. He has been awarded honorary degrees by 32 other colleges and universities. Thornburgh served as Director of the Institute of Politics at Harvard's John F. Kennedy School of Government, lectured at over 125 campuses, debated at the Oxford Union, and frequently appeared as a guest commentator on network news and talk shows. The University of Pittsburgh Press published Dick Thornburgh’s autobiography, Where the Evidence Leads, in September 2003. A long-time supporter of self-determination, Mr. Thornburgh authored The Future of Puerto Rico: A Time to Decide, in which he calls for immediate change in the island's territorial/commonwealth status.

The Role of Science and Technology in Economic Development

"Dick Thornburg's presentation was powerful and educational. We will definitely want him back."