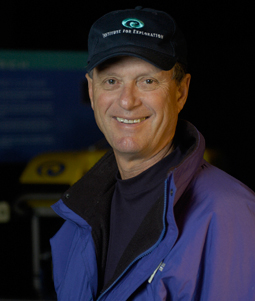 As the world's foremost Deep Sea Explorer, Dr. Robert Ballard will inspire any audience by taking them on a journey full of adventure to the bottom of the ocean. Best known for his 1985 discovery of the Titanic, he and his team have succeeded in tracking down numerous other significant shipwrecks, including the German battleship Bismarck, the lost fleet of Guadalcanal, the U.S. aircraft carrier Yorktown (sunk in the World War II Battle of Midway), and John F. Kennedy's boat, PT 109.

Dr. Robert Ballard has 13 honorary degrees and six military awards. He is also a commander in the U.S. Naval Reserve. He received the National Geographic Society's prestigious Hubbard Medal in 1996 for "extraordinary accomplishments in coaxing secrets from the world's oceans and engaging students in the wonder of science." Ballard has published numerous books, scientific papers, and a dozen articles in National Geographic magazine. Ballard also has been featured in several National Geographic television programs, including the record breaking "Secrets of the Titanic."

His discoveries also include the Mediterranean Sea finds of sunken remains of ships along ancient trade routes, two ancient Phoenician ships off Israel, the oldest shipwrecks ever found in deep water, and four 1,500 year-old wooden ships, one almost perfectly preserved in the Black Sea. Ballard's Black Sea project seeks evidence of a great flood possibly linked to Noah's Ark that may have struck the region thousands of years ago.

"It was incredible! Dr. Ballard was an absolute joy to work with and the audience was captivated from the very first moment. I was hanging on to every word. His passion for science and discovery was evident in his presentation and he really inspired our audience."