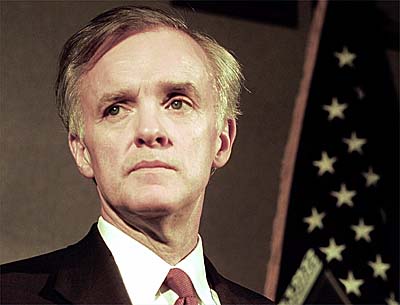 Since his election to the U.S. Senate, Bob Kerrey has impressed political observers with his independence, candor, and tireless determination to make government work. Kerrey's devotion, hard work, and leadership has made him one of America's most effective political leaders. Before coming to the Senate, Kerrey served one term as Governor of the State of Nebraska from 1983 to 1987.

In the Senate, Kerrey became a nationally recognized advocate of educational technology, fiscal responsibility, health care, and entitlement reform. Appointed by the President in 1994, Kerrey co-chaired the Bipartisan Commission on Entitlement and Tax Reform.

In 1996, Kerrey launched the CLASS (Communications Learning and Assessment in a Student-centered System) Project, a federally sponsored project to develop a fully accredited, interactive high school curriculum on the internet. The CLASS project enables schools and students to access classes they would be unable to afford through traditional means of delivery. For this project, Kerrey enlisted the help of the University of Nebraska, the Nebraska Department of Education, Nebraska Educational Telecommunications and others.

Kerrey was born on August 27, 1943, attended Lincoln Public Schools, and is a graduate of the University of Nebraska at Lincoln. Kerrey is a former Navy SEAL and a highly decorated Vietnam veteran. He is a recipient of the Medal of Honor, America's highest military honor. Kerrey is a self-made businessman who, upon returning from the war and starting from scratch in 1972, built a chain of highly successful restaurants and health clubs. Kerrey is the father of two children, Benjamin and Lindsey. In 2001, Kerrey became president of the New School University in New York City.

Is Progressivism Good for Business?

"Senator Kerrey was phenomenal. Our audience loved and our organizers were thrilled with his lecture.  Absolutely we recommend him."