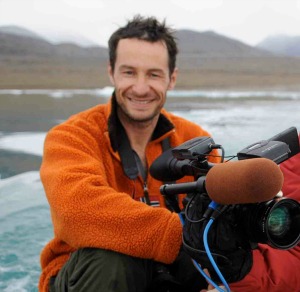 An international speaker on climate crisis for over a decade, Sebastian has addressed audiences at the United Nations, the World Affairs Council, the General Assembly on Climate in New Orleans, the George Eastman House, Google Headquarters and to Apple's Senior Design Team amongst others. He has appeared on Larry King Live, NPR, ABC, Air America, and Al Gore's Current TV, as a champion of environmental causes. He is an adventurer whose keynotes and extraordinary photographs will entertain and inspire audiences at any conference or event.

His talks can be customized to address how motivation in the most antagonistic environments relates to the corporate world and the meaning of giving 100%. He is also an expert on the climate impact on the polar regions, their geopolitical implications, and the urgent need for a market transformation to a sustainable economy.

Sebastian Copeland has clocked over 8,000 kilometers under his skis. In 2009 he traveled the Arctic with expedition partner Keith Heger on a journey to reach the North Pole, in hopes of raising awareness to climate change and its effects on the Arctic. The outcome of this voyage is the award winning documentary Into the Cold: A Journey of the Soul. The film captures two men's dramatic expedition to the North Pole in sub-zero temperatures - considered by experts to be the toughest expedition in the world - covering more than 400 miles on foot. A personal and harrowing journey of endurance and commitment, Into the Cold: A Journey of the Soul delves into the depth of the soul against the backdrop of the magnificent Great North, and exposes one poignant message: if the Great North goes, so does humanity.

In 2010, Sebastian crossed 2,300 kilometers of the Greenland Ice Cap, setting a Guinness record for the longest distance traveled by skis and kites over 24 hours with 595 kilometers.

In 2011-12, over 82 days, Copeland made the first east to west transcontinental crossing of Antarctica. Facing brutal cold, merciless wind and storms, Sebastian covered 4,100 kilometers on skis and kites via two of its poles: the pole of inaccessibility and the south pole.

As a renowned photographer, Copeland's fine quality prints have appeared at the United Nations, the Council on Foreign Relations, Peabody Essex Museum and the Field Museum among others. These works can also be found in private collections in both Europe and the United States where several are now part of the permanent archive of The Natural World Museum in San Francisco. Copeland is a recent winner of the prestigious International Photography Awards' Professional Photographer of the Year for his first book, Antarctica: The Global Warning. Sebastian Copeland's prints from his first book were also selected to tour as part of the 2006 and 2007 IPA "Best of Show" collection. His still work has appeared in hundreds of publications worldwide including National Geographic, Men's Journal, GQ, Vanity Fair, Elle, People, Publisher's Weekly, and USA Today.

The Global Warning: How the Ice Foretells the Next Systemic Transformation

An Evening with Sebastian Copeland