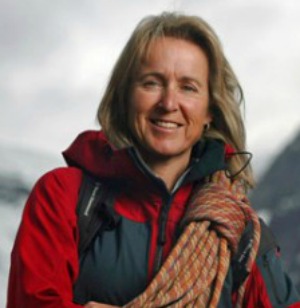 Sharon Wood is the first woman in North America to climb Mount Everest. Wood's climb of Everest was only one facet of more than twenty years experience as a professional and elite mountaineer, with numerous ascents of summits over 20,000 feet to her credit. Mount Everest was a culmination of an odyssey that began at age twelve when her father took her up her first mountain. By the time she was seventeen she was devoting all her time to climbing.  Her first break came in 1977 when she joined an all women expedition to Mount Logan. Then, in 1983, she had her first big success with the Cassin Ridge on Mount McKinley.

Expeditions to Makalu (1984), the south face of Aconcagua (1984) and the northeast face of Huascaran Sur (1985) followed. By 1986 she realized that she was ready for anything. Her ascent of Mount Everest by the difficult west ridge and north face was first for a North American woman. Sharon’s team climbed Mount Everest by way of a new and difficult route, a smaller team, without Sherpas and with fewer resources. Their bold approach inspired exemplary character and extraordinary esprit de corps.

After Everest she moved on to other adventures. Much in demand as a public speaker, she travels the world sharing her experiences and her approach to risk.

Everest: Insights from a Higher Ground

"The themes around teamwork, personal accountability and perseverance truly parallel not only Bank of America as a whole, but also my team’s immediate environment of achieving greater levels of success in the face of what appears to be unattainable."