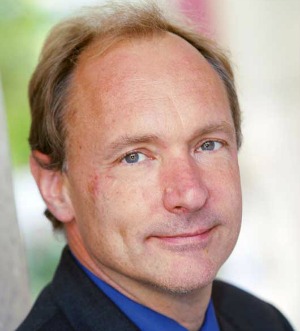 At CERN, Berners-Lee was faced with the daunting task of correlating the sprawling body of research carried out by separate teams, all documenting their work on disparate, incompatible systems. For his own convenience, he devised a software application he called Enquire, based on the concept of "hypertext," which allowed him to link documents on the basis of single-word associations, rather than through the branching hierarchies of existing systems. Berners-Lee urged his associates at CERN to try Enquire, but found few takers.

When his assignment at CERN ended in 1981, Berners-Lee took a job at Image Computer Systems, developing graphics and communications software and a generic macro language. Although CERN had abandoned Berners-Lee's Enquire program, the young software engineer had made a lasting impression, and in 1984 CERN offered him a fellowship to work on distributed real-time systems for data acquisition and system control.

On returning to Geneva, Berners-Lee found a more challenging situation than before. The lab had even greater need for a flexible system of sharing research documents. At the time, the Internet, a rudimentary network developed by the Pentagon, was gradually being adopted by researchers around the world for exchanging plain text messages through mail groups. By 1989, CERN was already home to the largest Internet node in Europe, but finding information over the Internet was no easy task. Requests for information had to be sent from one user to another, and replied to individually. Distributing messages to a group, and collecting their feedback, created long documents, with relevant information buried under a blizzard of queries, addresses and replies.

Berners-Lee imagined combining the Internet with linked hypertext documents, to provide access to an open-ended body of interactive information. In March 1989, Berners-Lee proposed a global hypertext project, one that would permit researchers all over the world to share work-in-progress, transmitted instantaneously, without the delays associated with traditional scholarly publication or cumbersome mail groups. With collaborators at CERN, Berners-Lee wrote the "hypertext transfer protocol" (HTTP) for transmitting documents over the Internet.

HTPP standardizes communication between web servers, where documents are stored, and the client programs, or browsers, used to view them. He also originated a system of identifying documents, originally known as the universal resource indicator, now known as the universal resource locator (URL). He devised the hypertext markup language (HTML) for formatting web documents, and programmed the first web server to store and transmit them. To make the proposed network visible to the end user, he created the first web browser, an application for both viewing and editing the documents online, which he named WorldWideWeb. He made the entire system available within CERN in October 1990.

At first, his invention attracted little notice. On August 6, 1991, he opened his web site (info.cern.ch) to public access over the Internet. He posted instructions for how to set up web servers and create sites, providing all the software he had created, free of charge. He announced his creation through a few Internet mail groups. Word of his invention spread quickly through the international community of computer enthusiasts, who soon set up servers and built web sites of their own. When they sent word of their work to Berners-Lee, he quickly provided links to their sites on his own. With input from an ad hoc army of volunteer collaborators around the world, he continually refined his specifications. The World Wide Web made it possible, not only to link text documents, but to download software and provide access to artwork, photography, audio and video files.

As web sites serving every possible interest proliferated, use of the web spread beyond the specialized audience of computer specialists to the public at large, and a need arose for browsers that would function on a variety of platforms and operating systems. Software companies created their own applications for browsing the burgeoning web: Mosaic, Netscape Navigator and Internet Explorer. Web users soon found that the competing browsers did not all support the same functions, and Internet service providers looked for ways to control the public's access to the web.

Entrepreneurs approached Berners-Lee with schemes for making a profit on his invention, but from the beginning, Berners-Lee declined all offers. He has always insisted that the web remain an open space, equally accessible to all computer users, without collecting fees for the use of patented software. In 1994, he joined the Laboratory for Computer Science at the Massachusetts Institute of Technology (MIT), where he founded the World Wide Web Consortium (W3C), an international governing body for the web. The Consortium, with teams in the United States, Europe and Japan, coordinates development of web technology among participating companies. It enforces standards based on royalty-free technology, with the goal of keeping the web open and accessible to all, free of domination by any one company or interest. Berners-Lee also holds an endowed chair at MIT's Computer Science and Artificial Intelligence Laboratory (CSAIL). As a Senior Research Scientist, he heads CSAIL's Decentralized Information Group.

Timothy Berners-Lee recounted the story of the birth of the web, along with his thoughts on its future, in his 1999 book Weaving the Web. He has received numerous awards and honors for his contribution to civilization. In 2004, he was knighted by Queen Elizabeth II. That same year, he received the first Millennium Technology Prize from the government of Finland, an award of over a million euros. At the end of the year, he also accepted a chair in Computer Science at the University of Southampton, England. Southampton's School of Electronics and Computer Science is now a major center for the development of Berners-Lee's vision of the Semantic Web, an extension of the web that will permit search agents to identify links based not only on verbal expressions in written language, but in computer languages as well.

Global and regional integration: A talk about on-going process of market integration.

"Great speaker, packed with content and laced with great humor.  A perfect Keynoter for any convention/conference."