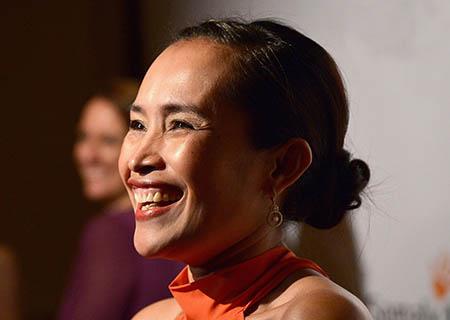 Cambodian Human Rights Activist, born to a tribal minority family in the Mondulkiri province of Cambodia, Somaly Mam began life in extreme poverty. With limited options as part of a severely marginalized ethnic group, and living in unimaginable despair, her family often resorted to desperate means to survive. This confluence of dire circumstances led to the unspeakable horrors that would mark Mam's early years. Mam was sold into sexual slavery by a man who posed as her grandfather. To this day, due to the passing of time and the unreliability of a wounded memory, she still does not know who this man was to her. Yet his actions set her on an unimaginable path fraught with danger, desperation, and ultimately triumph.

Forced to work in a brothel along with other children, Mam was brutally tortured and raped on a daily basis. One night, she was made to watch as her best friend was viciously murdered. Fearing she would meet that same fate, she heroically escaped her captors and set about building a new life for herself. She vowed never to forget those left behind and has since dedicated her life to saving victims and empowering survivors.

In 1996, Somaly Mam established a Cambodian non-governmental organization called AFESIP (Agir Pour les Femmes en Situation Precaire). Under Mam's leadership, AFESIP employs a holistic approach that ensures victims not only escape their plight, but also have the emotional and economic strength to face the future with hope. With the launch of the Somaly Mam Foundation in 2007, she has established a funding vehicle to support anti-trafficking organizations and to provide victims and survivors with a platform from which their voices can be heard around the world.

For her tireless efforts, Mam has justifiably garnered worldwide respect and is now a renowned leader at the forefront of the anti-trafficking struggle. Universally recognized as a visionary for her courage, dignity, ingenuity, and resilience, Somaly was honored as one of Time's 100 Most Influential People of 2009 and was featured as a CNN Hero. She is also the recipient of the Prince of Asturias Award for International Cooperation, The World's Children's Prize for the Rights of the Child (WCPRC), and Glamour Magazine's 2006 Woman of the Year Award, and has won accolades from the US Department of Homeland Security.

Human Rights and Our World

An Evening with Somaly Mam