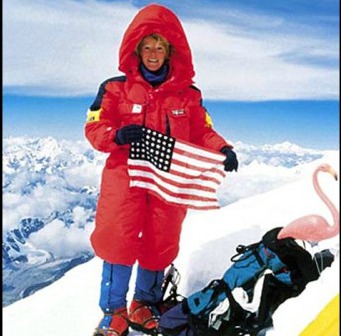 Stacy Allison has climbed the world's most famous mountain. Now she's helping organizations across the globe scale their own monumental challenges. Stacy understands mountains: she has been climbing mountains and leading expeditions for more than 20 years in remote regions around the world, including Tibet, Pakistan, and Russia.   She also understands business: Stacy Allison is president of Allison Construction, a residential building company in Portland, Oregon.

At the age of 21, Allison began major alpine climbing in earnest and achieved rapid success. Within a year, Stacy reached the top of Alaska’s Mt. McKinley, the highest point in North America, and was part of the first successful women’s ascent of Ama Dablam, the 22,495 foot peak known as Nepal’s Matterhorn. These accomplishments provided the groundwork for much greater accomplishments.

Stacy Allison was the first American woman to top Pik Communism (now known as Ismoil Somoni Peak), at 24,600 feet, the tallest peak in the Russian Pamir Range. On her first attempt on Mt Everest, Allison did not summit, but she returned to Mt. Everest with the Northwest American Everest Expedition. On September 29, 1988, after twenty-nine days on the mountain, Stacy Allison became the first American woman to reach the summit of Mt. Everest, the world’s highest mountain at 29,028 feet. Allison then went on to become the leader of a successful K2 expedition, the world's second highest mountain, considered to be the most difficult peak on Earth to climb.

Stacy Allison combines her business acumen and her spirit for adventure to show her audiences how to thrive in their organizations through courage, leadership, vision, teamwork, risk taking, and personal accountability. Stacy's high content, tailored, dynamic presentations will encourage and inspire you to take a visionary look at opportunities and move beyond your limits. The future will never look the same!

Stacy Allison’s first book, Beyond the Limits: a Woman’s Triumph on Everest, is a suspenseful, triumphant adventure story. Her second, Many Mountains to Climb; Reflections on Competence, Courage and Commitment is an exciting anecdotal account of climbing challenges practically applied to help you plot your way more surely to professional and personal success. Allison also contributed a chapter on Leadership in the book, Upward Bound.

Many Mountains to Climb!

Beyond the Limits: a Woman’s Triumph on Everest

Many Mountains to Climb; Reflections on Competence, Courage and Commitment

"You tied your experiences in with our ever-changing environment and sense of urgency to meet the challenges that we are facing."