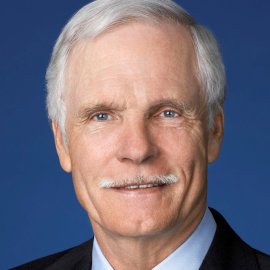 A man with unprecedented business savvy, Ted Turner was named Time Magazine’s 1991 Man of the Year. Turner began his business career as an account executive for Turner Advertising Company (now TBS, Inc.), and in 1963, became president and chief operating officer. He held this position until the company’s merger with Time Warner in 1996.

The aggressive billionaire built a communications empire from his father’s billboard business. Turner entered the television business in 1970 with the purchase of an Atlanta independent UHF television station. Six years later, he diversified the company by purchasing MLB’s Atlanta Braves. He has since gone on to found the most respected news network in America, CNN, as well as Turner Network Television.

In 1985, Turner originated the Goodwill Games as a quadrennial, multi-sport, international, world-class competition. He is a firm believer in giving back to others, and has donated over $200 million dollars to charity in 1994 alone.

Few people have understood and reacted to American business better than Turner. An executive with incredible vision, Turner has an amazing story to tell.

Turner is co-chairman of the Nuclear Threat Initiative, a charitable organization working to reduce the global threats from nuclear, biological and chemical weapons; chairman of the Turner Foundation, Inc., which supports efforts for improving air and water quality, developing a sustainable energy future to protect the earth’s climate, safeguarding environmental health, maintaining wildlife habitat protection, and developing practices and policies to curb population growth rates; chairman of the United Nations Foundation, which promotes a more peaceful, prosperous and just world; and a partner in the Ted's Montana Grill restaurant chain, which operates more than 55 locations nationwide.

Turner is also chairman of Turner Enterprises, Inc., a private company, which manages his business interests, land holdings and investments, including the oversight of two million acres in 12 states and in Argentina  and more than 50,000 bison head.

The United Nations and the World

Environment Issues and Our Future

Steps to Take to Eradicate Poverty