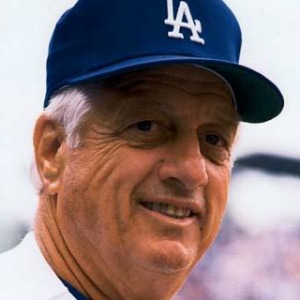 Regarded by many as baseball's most popular ambassador, Tommy Lasorda begins his 63rd season with the Dodgers and his seventh as special advisor to the chairman. He was named vice president in 1996 after retiring as manager, a position he had held for the previous 20 seasons. Lasorda assumed all player personnel responsibilities when he was named the Dodgers' interim general manager in June 1998. He relinquished his general manager duties when he was promoted to senior vice president in September 1998.

In his current position, Lasorda reports directly to the Office of the Chairman, serving as an advisor on all areas of the Dodgers organization. Lasorda's current responsibilities include scouting, evaluating, and teaching minor league players; acting as an advisor and ambassador for the Dodgers' international affiliations; and representing the franchise at more than 150 speaking engagements and appearances for various charities, private groups, and military personnel each year.

He has spoken to troops at more than 40 military bases around the world, including a five-country goodwill tour in 2009 with Admiral Mike Mullen, chairman of the Joint Chiefs of Staff, with whom he visited troops throughout the Middle East. One of the most popular and outspoken figures in professional sports, he led the team to two World Series championships, four National League pennants, and six divisional crowns during his remarkable career.

Lasorda's career as a major league pitcher consisted of two seasons with the Dodgers and one year with Kansas City. He pitched in four games for the 1955 Dodgers - the first Dodgers team ever to win a World Series. He holds the all-time International League record for career wins (125) for the Montreal Royals. Lasorda has won numerous awards including three Manager of the Year Awards and the Humanitarian Award from the Philadelphia BBWWA chapter. He was the recipient of the first Milton Richman Memorial Award by the Association of Professional Baseball Players of America.

An entertaining and powerful speaker, Tommy Lasorda captivates, educates, and energizes his audiences with his colorful stories, humor, and life lessons.

An Evening with Tommy Lasorda

Empowering Programs for Our Troops

Inspiring a New Generation of Leaders

"Tommy Lasorda captivates, educates, and energizes his audiences with his colorful stories, humor, and life lessons.  A perfect 10 speaker!"