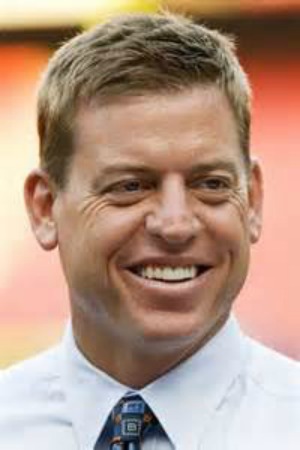 Troy Aikman is one of the most respected broadcasters on FOX, Aikman continues to provide key insights and thoughtful analysis for fans around the world. Aikman finished his collegiate career as the third rated passer in NCAA history. An All-America at UCLA, Aikman joined the Dallas Cowboys as the first overall pick in the 1989 NFL Draft. He became the first Dallas rookie quarterback to start a season opener since Roger Staubach in 1969. Although he showed great promise and threw for a rookie-record 379 yards in a game against the Phoenix Cardinals, the team finished 1-15. As the young quarterback improved, however, so too did the Cowboys' record.

In 1992, in just his 52nd game, Aikman reached the 10,000-yard passing mark, and his 302 completions were second most in team history. That season also marked the end of Dallas' odyssey from worst to first. With their high-powered offense and stingy defense, the 13-3 Cowboys swept through the 1992 NFL playoffs, scoring a combined total of 116 points in three games including a 52-17 victory over the Buffalo Bills in Super Bowl XXVII. Aikman's 22 of 30 for 273 yards passing and four touchdowns earned him Super Bowl MVP honors.

Over the next three seasons, the Cowboys enjoyed three consecutive 12-4 records and victories in Super Bowls XXVIII and XXX. Aikman, wide receiver Michael Irvin, and running back Emmitt Smith delivered an offensive attack that opponents found nearly impossible to contain. When defenses focused on Irvin and/or Smith, Aikman would find tight end Jay Novacek or wide receiver Alvin Harper. In the 1994 NFC Divisional Playoff Game against the Green Bay Packers, Aikman completed 23 of 30 passes for 337 yards. Irvin, Novacek, and Harper, each had more than 100 yards receiving. Aikman's 94-yard touchdown pass to Harper was the longest play from scrimmage in NFL post-season history at the time.

With 90 wins in the 1990s, Aikman became the winningest starting quarterback of any decade in NFL history. Unfortunately, during his final two seasons, injuries began to take a toll on the Dallas quarterback and the team's winning ways. Finally, after the 2000 season, the Cowboys' six-time Pro Bowl selection announced his retirement from football. His career statistics include 32,942 yards and 165 touchdowns for a passer rating of 81.6.

Life Lessons from all Star Athlete

An Evening with Troy Aikman

"Tory Aikman captivates, educates, and energizes his audiences with his colorful stories, humor, and life lessons."