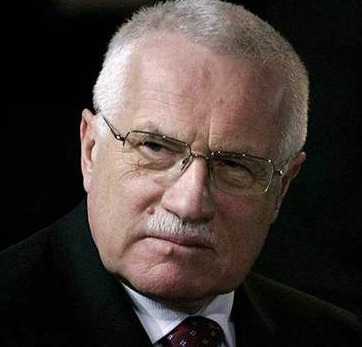 Considered one of Eastern Europe’s most influential post-Communist leaders, he was previously Finance Minister in the former Czechoslovakia, presiding over revolutionary economic reforms.

Klaus started out as an economist after obtaining his university education at the University of Economics, Prague. He took advantage of the relative liberalization in the then Czechoslovakia in order to study in Italy and the US and served as a research worker at the Institute of Economics of the Czech Academy of Sciences where he earned a PhD in Economics.

In 1970 he abandoned his research career for political reasons, and left to work at the Czechoslovak State Bank, but returned to academics at the Prognostic Institute of the Czech Academy of Sciences.

Immediately after the events of November 17, 1989, Klaus entered politics, but did not lose contact with the world of economic science. He continued to lecture and publish occasionally, and was engaged as a lecturer at Charles University in the field of economics. In 1995 he was appointed professor of finance at the University of Economics, Prague.

He embarked on his political career in December 1989, when he became Federal Minister of Finance. In 1991, he was appointed Vice Chairman of the Government of the Czechoslovak Federal Republic after he had become the chairman of the then strongest political entity - the Civic Forum. Following its demise, he co-founded the Civic Democratic Party, and served as chairman until 2002. He won a parliamentary election with this party in 1992 and became Prime Minister of the Czech Republic. In this role he shared in the "Velvet Divorce" of the Czechoslovak Federation and the foundation of an independent Czech Republic. He successfully defended his post as Prime Minister in election to the Chamber of Deputies. He resigned in 1997 following the collapse of the governing coalition. After a forced general election in 1998, he became chairman of the Chamber of Deputies of the Czech parliament for a four-year period. On February 28, 2003 he was elected President of the Czech Republic.

He has published over 20 books on general social, political and economic themes, and has been awarded a number of international prizes and honorary doctorates from universities all over the world.

"President Vaclav delivered a powerful message of optimism and hope."

--Meeting Coordinator, The Club of Rome