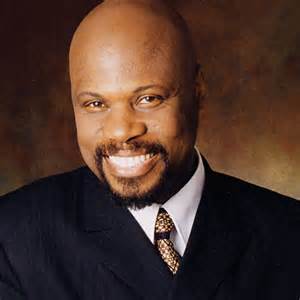 Wintley Phipps was born in Trinidad, West Indies, and grew up in Montreal, Canada. In those formative years he was surrounded by music of the church. Following graduation from Kingsway College (a high school near Toronto, Ontario) he attended Oakwood College in the 1970s, where he studied music theory and began writing gospel music. After graduating from there in 1976, he continued his education by attending Andrews University, where he completed an M.Div. in 1979.   Since graduating from AU, Phipps has served simultaneously as a minister, acclaimed singer and writer of religious music, and innovator in programs that offer hope to children and youth. With his wonderfully resonant baritone voice, he has witnessed through music in a way that has earned him international recognition. He earned two Emmy nominations in 1988 and 1989 for his writing, has given numberless concerts, and sung at prayer breakfasts for Ronald Reagan, Bill Clinton and George W. Bush, and at the Vatican and Billy Graham Crusades.

A person who believes that "there is a purpose and destiny for each life," and that "the most exciting adventure a human being can experience is to connect through service," Phipps has inspired others with both his message and his actions. An outstanding example of the latter is his founding of the U.S. Dream Academy in 1998, a nonprofit organization that through its programs seeks to offer hope to those with few opportunities to better themselves and lead productive lives. Discouraged by the high number of African-Americans he saw when doing prison ministry years ago, Phipps wanted to help persons break the cycle of crime and incarceration that plagues families and communities when few opportunities exist. The academy provides value-based tutoring, remedial education, support, and mentoring for children and youth in at-risk situations.

The first U.S. Dream Academy, which opened in 2000 in Washington, D.C., was followed by a second in that area. Their success has led to the establishment of similar programs in larger cities across the nation. The program attracted national attention and, in 2004, an Excellence in Mentoring Award, the nation's highest award for service of this type. Phipps subsequently received a Use Your Life Award of $1,000,000 from Oprah Winfrey in 2005, which was used to expand the program; and in that same year, Phipps received a check for $100,000 to assist in his work with the academy at the MarkerMan Productions Fall Leadership weekend.

An Evening with Wintley Phipps

"Wintley did a superb job for our conference. Guests from around the world can relate with his message and enjoy his music."