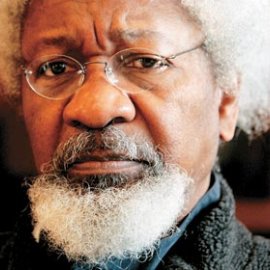 Nobel Laureate for Literature, International best-selling author. The life of Wole Soyinka's is one of the rare, riveting biographies of our time. His life course has brought him from death's door as a political prisoner in solitary confinement to the hallowed halls of Harvard, Yale, and Leeds. Soyinka seems fated to bridge elements in our world which are poles apart. His vision is described variously as, "inspirational, transcendent," and "demanding but rewarding." As a play write, poet, and novelist Soyinka's vision comes to us through a stunning corpus.

The Emory University Trustees Executive Committee whole heartedly affirmed the appointment of Nobel Laureate Soyinka to the position of Robert W. Woodruff Professor of the Arts, put forth by their President William Chase, in September 1996. Soyinka who has held positions at Yale, Cornell, Cambridge, and Harvard is acknowledged as one of the great dramatic imaginations of the 20th Century.

Many critics consider Soyinka Africa's finest writer. His unique style blends traditional Yoruban Folk Drama with European dramatic form. His corpus itself is one of the premier chronicles of Africa's political turmoil and its struggle to reconcile tradition with modernization. Soyinka warns against excesses in either African impulse. In Dance of the Forests he warns against living in nostalgia for Africa's past, and followed that work with The Lion and the Jewel in which he lampoons Africa's indiscriminate embrace of Western modernization. His wide-ranging wit takes in all sections of a corrupt society - the brutal masses, aimless intellectuals, the affected and hypocritical university dons, the vulgar, corrupt businessmen, the mediocre civil servants, the illiterate politicians, and the incompetent journalists. In his play King Baabu (2001) Soyinka parodied past and present African dictators. The title refers to Alfred Jarry's classic absurdist play, Ubu Roi (1896). Soyinka's play's title, 'Baabu' is a pun on the Hausa word 'baabu', which means 'nothing' or metaphorically 'finished'.

Soyinka's passion for the written word is nowhere more poignantly revealed than by his actions during his political imprisonment. He was denied reading and writing materials, but he manufactured his own ink and began to keep a prison diary, written on toilet paper, cigarette packages and in between the lines of the few books he secretly obtained. Each poem or fragment from the journal he managed to smuggle to the outside world became a literary event and a reassurance to his supporters that Soyinka still lived.

An Evening with Wole Soyinka

The Lion and the Jewel

"Professor Soyinka's riveting remarks were inspiring and educational.  We appreciate his efforts in customizing the lecture to our needs."